Some call it stories. Others call it a blog. But here you will find nuggets of goodness to use and -- you guessed it -- SHARE!

Executive Director Blog Series No. 5: Academy Center of the Arts 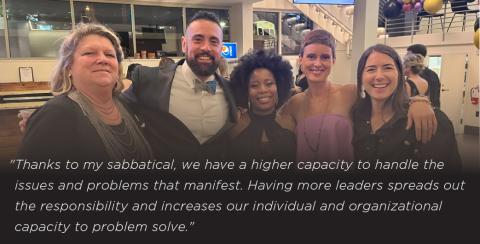 It has been a great honor to share my sabbatical experience through SHARE Greater Lynchburg. Through a series of posts (No. 1, No. 2, No. 3, No. 4), I have shared the reasons for my sabbatical from both a personal vantage point and an organizational vantage point. In my previous post, I shared my takeaways upon my return. In my final post, I want to share the result of the sabbatical on the Academy Center of the Arts as an organization.

The genesis of the sabbatical was the collision of two forces; my great need for a respite smashing into our need for an organizational chart overhaul (which were not independent of one another). Through Ryan Ripperton Consulting, we took both of those needs and addressed them through what would become a nine-month process. This involved the creation of a three-person “c-suite,” (Kimberly Morey, Tabitha Abbott, and Michelline Hall), shifting my direct reports from nine individuals to three. Then we took five months to prepare for my sabbatical by offloading my responsibilities to the c-suite and board leadership. During the three months of my absence, the new leadership team gained autonomy and confidence by leading the organization. Finally, I returned to the organization and took a month to acclimate, adjust, and discover my new role, while the c-suite held on to many of the responsibilities they acquired during my leave (and will continue to hold onto in the future).

I was away from mid-May to mid-August 2022, and this was not a quiet period for the Academy. We were transitioning CRM systems, executing summer programs with a brand new education team, launching a new outdoor music series, the Blackwater Music Festival, and dealing with all the day-to-day activity that keeps the organization delivering its mission through the execution of programs, fundraising, and future planning.

Occasional problems in the non-profit sphere are inevitable and the process took this into account. It was improbable that a higher level of responsibility would not be needed during my absence from the leadership team. The hope was that the team would build bench strength by tackling these problems without my input and support. This occurred, and it occurred through the execution of the Blackwater Music Festival.

I won’t go into all the nitty-gritty details of what occurred, but there was a point where moving ahead with the festival was untenable, and the team had to cancel the concert series. Making the decision to cancel the festival didn’t come without complications. There were contracts, marketing was underway, sponsorships were committed and tickets had been purchased. The implications were wide-ranging; normally, I would have been the one to make a final decision and answer for the consequences. The team had to go at this alone and it was scary for them on multiple levels.

I could not be prouder of the Academy staff. They didn’t do anything I wouldn’t have done when faced with the circumstances they faced. In my opinion, they made the right call in walking away from the festival. It came with a significant financial loss and PR concerns. It took great bravery to take ownership of this decision and their actions were a sign of true leadership. Most importantly, the team bonded through this crisis, and through this bonding, they found strength and courage: not just in themselves, but in one another.

Outside of the music festival, things went very smoothly. By all reports, our summer programs went better than they ever have, we planned a successful Gala, and we booked the theaters for this fall. Our months of planning, all in all, led to a smooth and steady day-to-day work environment.

Also of note was our board leadership. During this time, Elizabeth Stroud, our board president, had to oversee the decisions around the music festival and provide stability and guidance for the group at large. Important bonds were formed and Elizabeth’s leadership was visible and strengthened through the process.

On my first day back, I reported to a member office at the Lynchburg Regional Business Alliance. It was recommended that I meet with each of our c-suite leaders and our board president, one-on-one in an offsite location prior to my return to the office. Because the sabbatical was “no contact,” I largely didn’t know what had happened while I was gone. The team had the opportunity to share their experiences and gave me time to digest the information before re-entering the office. This may seem extreme, but it was really helpful. Any anxiety or frustration (I didn’t really have any frustration) that I may have experienced on day one had settled when I entered our offices and greeted the rest of the team on day two.

I have now been back for a number of weeks. I am here to report that the process was successful and the intended institutional outcomes have occurred. Our staff and operations have never been healthier. In fact, it is the healthiest that it has ever been in my seven years with the organization. Do we still have some tensions and day-to-day stresses? Sure, we do. The difference, though, is that we have a higher capacity to handle these issues and better means to address the issues that manifest. Having more leaders on the team spreads out the responsibility and increases the capacity to problem-solve.

I now have a new job within the organization. My responsibilities have shifted from internal management to oversight, long-term strategy, community ambassadorship, and board management. I have more time to tackle larger strategic initiatives, attend public functions, and connect with as well as manage our board. This is going to be critical in the coming months and years.

Even as I was away, I knew that I would return to a cultural non-profit facing a new national economic environment. With inflation and struggling markets, we have many challenges ahead. I feel as though my time away has given me the emotional, intellectual, and psychological bandwidth to support and lead the team into these new, uncharted waters with greater strength and dexterity. I am so thankful we took the actions we took when we took them.

I continue to be immensely grateful for this entire process. As a non-profit leader, I hope we can inspire other leaders and institutions to examine such a process to strengthen their organizations and invest in their leaders. I highly recommend such a process for organizations that have the capacity and support to execute it… even if at first glance they may feel they don’t. It is this process itself that showed us that in fact, we did have the capacity and support for an executive sabbatical, we just had to have the bravery to do it.

We have so much great news to share from our nonprofit partners about their amazing work. But, we'd love to hear from you. Let us know if you have stories you'd like to tell and we'll make you a guest blogger!!